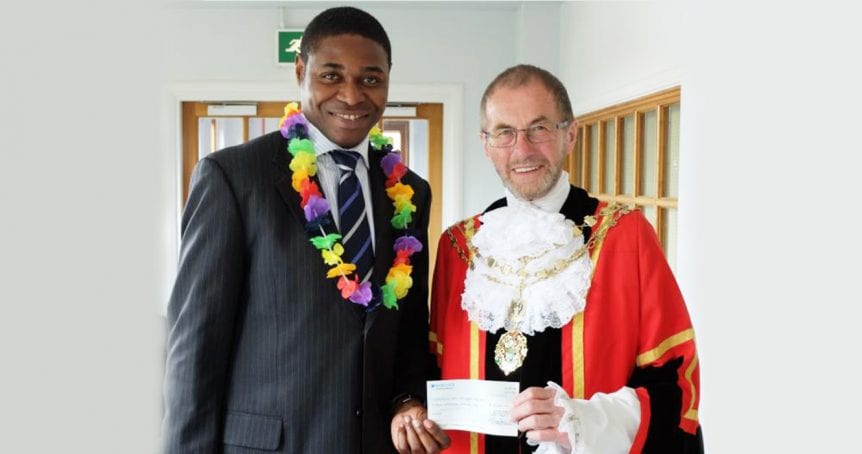 Dr Menakaya worked with His Worshipful, The Mayor of Hillingdon to buy a new specialist  baby transport incubator for the Neonatal Unit at Hillingdon Hospital, United Kingdom. Here, he receives a cheque of £15,000 from The Mayor towards the purchase of this important equipment.

There can be gold at the end of the rainbow, as the Mayor of Hillingdon discovered when he helped raise £15,000 for a new baby incubator.

They were so moved by the visit they decided to raise money, despite it not being part of their official Mayor’s Rainbow Charity Appeal.

Cllr Kauffman said: “It was a real honour visiting the unit and meeting staff, parents, volunteers and their babies.

“They do a great job under demanding circumstances and both myself and Lynne knew we wanted to help as soon as we left the hospital.

“Response from the public has been fantastic and I am so pleased to help as one of my last duties in office.”

Dr Menakaya, who personally collected the cheque this week, added: “I invited the mayor and mayoress to see the work of our neo-natal unit on World Prematurity Day.

“I knew they were moved by what they saw and the babies and families they met, but I was absolutely shocked when I learned they had managed to raise a huge amount of money from the community on our behalf.

“This was a fantastic and unexpected gesture. I can’t thank them enough for their support."

The neo-natal unit has 20 cots and cares for an average of 400 very sick and vulnerable new-born babies a year, some of who are born at only five and a half months.

Schedule an appointment for your child:
Schedule Now